The G7 Summit: What did the world leaders agree on?

In a communique released at the conclusion of the meeting in Cornwall, England, the leaders of the G7 countries – France, Germany, Japan, Italy, Canada, the United Kingdom, and the United States – sought to show that international cooperation is back on track after the disturbances caused by the pandemic.

Here is a round up-up of the G7’s main initiatives:

G7 leaders have pledged more than one billion coronavirus vaccine doses to be given to poorer nations, with half of the billion-dose pledge coming from the United Sates and 100 million from Britain. 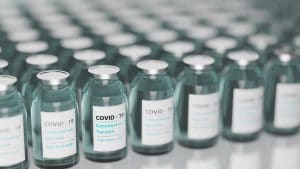 Vaccine inequity was a major talking point at the G7 summit, however some experts believe there still has not been adequate attention.

Despite Johnson’s call to “vaccinate the world” by the end of 2022, the pledge of one billion doses for vaccine-eager countries falls short of the 11 billion doses the World Health Organization (WHO) said is needed to vaccinate at least 70 per cent of the world’s population and truly end the pandemic.

The G7 said its pushing for a renewed investigation into the origins of the coronavirus pandemic and has urged China to cooperate with the United Nations health agency on a “transparent” second-phase probe.

“We … call for a timely, transparent, expert-led, and science-based WHO-convened Phase 2 COVID-19 Origin’s study including, as recommended by the experts’ report, in China,” the group said in their final statement.

A previous WHO study into the origins of COVID-19 was initially hampered by China’s lack of cooperation. WHO chief, Tedros Adhanom Ghebreyesus, said it was not “extensive enough” and “further investigation” was needed.

Climate change was a key focus with the G7 leaders formally backing the ramp-up of collective action to tackle the environmental crisis.

The “Build Back Better for the World” promises to offer high quality financing for vital infostructure, from railways in Africa to wind farms in Asia. It is intended to give developing countries access to more, better, and faster finance, while accelerating the global shift to renewable energy and sustainable technology.

Alongside the plan, the G7 leaders agreed to raise their contributions to meet an overdue spending sledge of $100bn to help poorer countries cut carbon emissions and cope with global warming.

Environmentalist, David Attenborough, addressed the leaders by video, warning that humanity is “on the verge of destabilising the entire planet”.

“If that is so, then the decisions we make this decade — in particular, the decisions made by the most economically advanced nations — are the most important in human history,” the veteran documentary filmmaker said.

"The decisions we make this decade are the most important in human history."

The G7 has backed a minimum tax of at least 15 per cent on large multinational companies, in an attempt to stop corporations from using tax havens to avoid taxes and thus depriving some countries of much-needed revenue.

The minimum rate was advocated by the United States and with President Biden aiming to focus the summit on ways the democracies could support a fairer global economy by working together.

The proposal will now go to G20 nations meeting in Italy next month.

The wealthy nations say they will work together to challenge China’s “non-market economic practices” and call on Beijing to respect human rights in Xinjiang and Hong Kong.

US President Biden had wanted to persuade fellow democratic leaders to present a more unified front to compete economically with Beijing and strongly call out China’s “nonmarket policies and human rights abuses”. 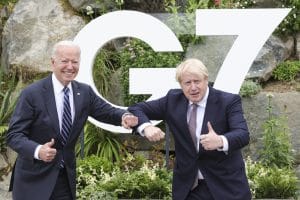 The G7 communique said: “With regard to China, and competition in the global economy, we will continue to consult on collective approaches to challenging non-market policies and practices which undermine the fair and transparent operation of the global economy.”

The leaders also said they will promote their values by calling on China to respect human rights and fundamental freedoms in Xinjiang and in the semi-autonomous city of Hong Kong.

G7 leaders demanded Russia take action against those conducting cyberattacks and using ransomware and called for an investigation into the use of chemical weapons on Russian soil.

“We call on Russia to urgently investigate and credibly explain the use of a chemical weapon on its soil, to end its systematic crackdown on independent civil society and media, and to identify, disrupt, and hold to account those within its borders who conduct ransomware attacks, abuse virtual currency to launder ransoms, and other cybercrimes,” a communique issued after the conclusion of the leaders’ summit in Britain said.

Australian Prime Minister Scott Morrison has sealed deals with Japan and Germany on the sidelines of the G7 to develop technology to help reach “a net zero emissions future”.

Morrison met with the Japanese Prime Minister, Yoshihide Suge, and announced a “partnership on decarbonisation through technology”. Morrison and Suga’s joint statement said they both recognised climate change as “one of the defining challenges and opportunities of our time” and described a technology-led response as critical to jobs and growth.

Morrison also met with the German chancellor, Angela Merkel, later on Sunday and they announced a “hydrogen accord” to “enhance collaboration in technology innovation, research, development and deployment to build a global hydrogen industry”.

Morrison had his first face-to-face meeting with Biden during the G7 – but the pair was joined by Johnson, in what became a trilateral engagement focused on the increasingly contested Indo-Pacific region and the rising influence on China.

Inspired by our shared past, enlivened by our future together. @POTUS @BorisJohnson @ScottMorrisonMP

Morrison said the leaders of G7 nations have a “strong level of support” for the stand Australia has taken against China. The prime minister said there was increased awareness from European nations about tensions in the Indo-Pacific region and Australia had to be patient to restore its troubled relationship with China.

Thank you for being a brilliant host, Cornwall.

The G7 Summit 2021 has officially come to a close, and what a few days it has been. We wish everyone a safe journey home.