United States President Joe Biden has ordered national intelligence agencies to intensify its efforts to determine the origins of coronavirus, saying they are pursuing theories of a possible laboratory accident in China.

Biden said in a statement that the US intelligence are looking into two different scenarios and have low confidence in their current conclusions.

“I have now asked the Intelligence Community to redouble their efforts to collect and analyse information that could bring us closer to a definitive conclusion, and to report back to me in 90 days,” Biden said.

Coronavirus was first detected in the Chinese city of Wuhan in late 2019 and has since spread around the world, killing nearly 3.5 million people worldwide and infecting almost 168 million.

It is well known to the public that someone from a food market in Wuhan was infected with the virus from a bat in 2019, however there are still investigations ongoing.

Much remains unknown about its origins and China has been delicate about any suggestion they could have done more in the early stages of the pandemic to stop it.

Biden’s request included asking the US intelligence community to explore the possibility that the origins of the virus trace back to a Wuhan laboratory accident.

The order comes after recent escalation of the growing controversy over how the virus first emerged.

In response to Biden’s statement, China has rejected any link between COVID-19 and a virus research lab in Wuhan.

China has also accused the Biden administration of playing politics and shirking its responsibility in calling for a renewed investigation.

Foreign Ministry spokesperson, Zhao Lijian, said at a daily briefing on Thursday that President Biden’s order showed the US “does not care about facts and truth, nor is it interested in serious scientific origin tracing”.

Republicans, including former US president Donald Trump, have openly promoted the theory that COVID-19 emerged from a laboratory accident, rather than naturally through human contract with an infected animal in Wuhan.

Zhao said it was “extremely unlikely” the virus had come from a laboratory in Wuhan, pointing to results of a report by the World Health Organisation mission in March.

Zhao said the US is using the pandemic to “pursue stigmatisation and political manipulation to shift the blame”.

“They are being disrespectful to science, irresponsible to people’s lives, and counterproductive to concerted global efforts to fight the virus,” he said.

Which theory is right?

The origin in which the virus passed naturally from a bat to human is based on the idea of a zoonosis. A zoonosis, such as rabies, is an infectious disease that has jumped from a non-human animal to humans. This is supported by the fact that coronaviruses have crossed the species barrier in exactly this way before.

On the other hand, there are plenty of instances for lab leaks in which researchers get accidentally infected by the virus they are working on. 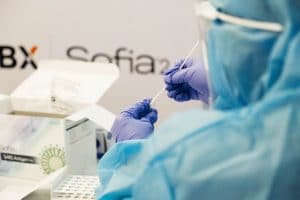 There has been a lot of recent escalation over the theory that COVID-19 originated in a Wuhan lab.

The Wuhan outbreak also happens to be the home of the world’s leading laboratory for the collection, study, and examination on bat coronaviruses.

The lab leak theory, brought into light by disinformation, was undermined not so much by China’s denials, but by the fact that it was being pushed by former President Trump during his reign.

As the debate continues between the US and China, it is looking more unlikely that China will allow another investigation on its soil.