Qantas will offer a range of incentives to people who are vaccinated, encouraging more people to get a COVID jab.

Qantas, which has had its business largely grounded during the COVID-19 pandemic, is hoping free flights, points, and credits will encourage Australians to get vaccinated.

The airline’s vaccine incentive program, which launches July 2021, will offer deals including unlimited travel for a year for 10 families.

“We are putting in a discount for people who have had the vaccine,” Qantas CEO Alan Joyce told Channel Nine.

“We are looking at giving 1000 points flight vouchers, credits and we are going to offer ten mega prizes, at least one for each state and territory, where a family of four get unlimited travel on the Qantas and Jetstar network, anywhere in the network for a year,” he said.

Joyce said hotel business Accor would offer a million points to each of the winning families to cover their accommodation as well.

“We are trying our best to help with this rollout – it will be retrospective and will include anyone who has already been vaccinated and will apply to anybody that is vaccinated until the end of 2021,” Joyce said.

The airline CEO has also called for other Australian companies to follow suit and explore what they could offer to encourage people to get the vaccine.

“We are trying our best to help with this rollout,” he said.

“I’m encouraging a Team Australia moment where every corporate out there helps with this vaccine rollout and to reward people that have had the vaccine.”

Joyce said Qantas plans to resume international flights by the end of the year, however the federal government has been criticised in recent months for its slow vaccine rollout and mixed messages on vaccine targets.

Other countries have already implemented incentives to encourage people to get vaccinated. 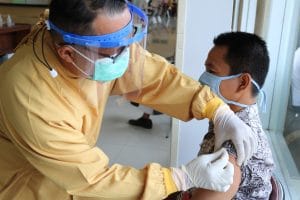 Incentives to get a COVID jab are becoming popular around the world.

Adults in Ohio, US, who have received at least one dose of a coronavirus vaccine, can win US$1 million in a weekly lottery.

Beijing has offered residents over the age of 60 who are vaccinated two cartons of fresh eggs for free. Also around China, it was reported people were offered free vegetables, ice cream, dumplings, cash prizes, and free entry into theme parks.

In the Indian city of Rajkot, goldsmiths have banded together to give women free gold nose pins for getting the jab, while men are offered a hand blender.

Health authorities have not ruled out introducing incentives in Australia to speed up the rollout, particularly before the flu season hits.

“I think we really do need to look for incentives, as many incentives as we can for people to become vaccinated,” chief medical officer Paul Kelly told reporters last week.