More records have been broken in the Australian Olympic Swimming Trials with up-and-coming swimmers illustrating their name to the sport.

The trials, however, have been overshadowed by Australian swimmer, Madeline Groves, announcing a withdrawal from the Tokyo Olympic trials, citing “misogynistic perverts” in the sport.

The women’s swimming trails have come against a backdrop of social media posts by Australian swimmer, Madeline Groves, about body-shaming in swimming.

Groves, a dual silver medallist at the 2016 Rio Olympics, announced her withdrawal from the trials on Instagram on Wednesday night, before the trails began in Adelaide on Saturday.

Groves followed up her announcement on Thursday morning on Twitter saying she would not stand for female swimmers being exploited.

“Let this be a lesson to all misogynistic perverts in sport and their bootlickers,” Groves tweeted.

“You can no longer exploit young women and girls, body shame or medically gaslight them and then expect them to represent you so you can earn your annual bonus.

Let this be a lesson to all misogynistic perverts in sport and their boot lickers – You can no longer exploit young women and girls, body shame or medically gaslight them and then expect them to represent you so you can earn your annual bonus. Time’s UP https://t.co/XMQCRPjNzK

The target of Groves’s comments in her tweets were not immediately clear.

The allegations have since prompted Swimming Australia to set up an independent panel to investigate issues relating to the experiences of women and girls in the sport.

“Obviously with some of the communications, some of the tweets, I think we have to investigate some of those issues,” he told reporters on Saturday afternoon.

Grove is expected to meet with Swimming Australia over the coming days to address the allegations.

Baumann said no other swimmer had come forward to swimming Australia with complaints about their treatment and thinks the sport did not have a problem with attitudes towards women.

Former SA chief executive Leigh Russell, who stepped down late last year, said on Tuesday that “it is time to listen and learn rather than continue to speak and spin the wheels”.

“The only people who don’t believe there’s a problem are those benefiting from the system as it is,” Russell tweeted. “Those in charge of sport (men) have long focused on fixing women to fit. It is indeed a broken boys club and there will be no genuine cultural integrity in sport until the system is fixed, not women.”

Those in charge of sport (men) have long focused on fixing women to fit. It is indeed a broken boys club and there will be no genuine cultural integrity in sport until the system is fixed, not women.

The social media row, however, did not stop Australia’s up-and-coming female swimmers from putting on a show at the SA Aquatic and Leisure Centre. 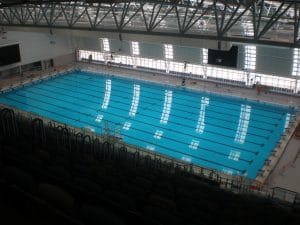 The SA Aquatic and Leisure Centre is the home of the Australian Olympic Swimming Trials this year.

Ariarne Titmus, 20, has again demonstrated why she is one of the brightest upcoming swimming stars of the world, with the second-fastest swim in history in the women’s 200m freestyle.

Titmus swam an impressive 1:53:09 on Monday night, beating veteran Emma McKeon in the event’s final at the trials.

Titmus’s time in the 200m freestyle was just 0.11 seconds off Italian Federica Pellegrini’s world record set in 2009, during the super-suit era. It has been the longest-standing women’s world record, which was set at a time when world records tumbled before the suits were banned.

Titmus’s swim came just one day after she threw down the gauntlet to reigning champion of women’s distance swimming, United States’ Katie Ledecky, by setting the second-fastest time in history in the 400m freestyle.

“More than anything, the 400m gave me confidence,” Titmus said after the 200m freestyle race.

Worryingly for her rivals, Titmus thinks she can go faster at the Olympic Games.

“I’d like to think so,” she said. “I think that I’m a racer, and with the Olympics around the corner I’m sure that hopefully I can lift at an Olympic Games.”

Titmus is now amongst the favourites to win gold medals in both the 200m and 400m freestyle events, along with the women’s 4X200m freestyle relay.

McKeown swam within 0.06 seconds of the world record in Sydney last month, but said she was not targeting it at the trials.

“To finally get myself onto that Olympic team is a dream come true, it really is,” McKeown said.

“I wouldn’t say [the record] was a goal, I’m more of a process-oriented person and it just so happened that I nailed all those little pin-points that we’re going for,” she said.

Finishing second by McKeown in the 100m backstroke was veteran Olympian, Emily Seebohm, who was emotional after qualifying for her fourth games.

“I knew this was going to be super tough to make this team and you know I really wanted to go to a fourth Olympics, you know, that was my dream when I started,” she said after the race.

The 29-year-old said she was motivated by her failure to qualify for the 2019 Australian World Championships team.

“A lot of people said that I wasn’t going to do it, I was too old, I needed to lose weight, I needed to look different, and I guess I just stuck to my guns and stuck to what I knew what would work best for me.”

On Tuesday night, the men were placed in the spotlight, and it was their turn to put on a display.

And they did not disappoint. 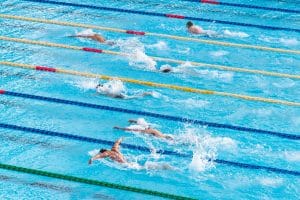 The 22-year-old was under world record pace until the last few metres, but still managed to swim the second-fasted time in history.

“Doesn’t feel real yet,” Stubblety-Cook said straight after the race.

“It’s exciting, just got to take it in my stride and keep on the process, I think,” he said.

Rio gold-medallist Kyle Chalmers will defend his 100m freestyle title, having won at the finals at the trials.

Chalmers had shoulder surgery last December and has been slowly improving as he targets his second Olympic campaign.

“It’s been a while since I’ve been 47, so to crack it by a significant amount is awesome,” he said.

Australia’s new young star swimmers have so far displayed an impressive Olympic trial. The trials, however, have been overshadowed by Grove’s allegations and discussions for cultural changes in swimming.