Victoria To Enter Seven-Day Lockdown in Response to Recent Outbreak

The Victorian government has announced a new seven-day lockdown today in a bid to reduce the state’s growing coronavirus outbreak.

The “circuit-breaker” lockdown will be in place from midnight Thursday until midnight on June 3. The lockdown marks the fourth lockdown the Victoria Government has implemented since the pandemic began.

Merlino said there would be only five reasons people would be allowed to leave their homes:

Masks must be carried at all times and must be worn indoors and outdoors except at home.

Schools will close for the duration of the lockdown and move to remote learning, but childcare and kindergartens will be open.

Cafes and restaurants can offer take-away only, essential retail will be open, and other retail will close. Public and private gatherings will not be allowed.

Merlino said the virus was spreading at an alarming rate, which prompted the lockdown.

“In the last day, we’ve seen more evidence that we’re dealing with a highly infectious strain of the virus, a variant of concern which is running faster than we have ever recorded,” he told reporters.

The highly infectious Indian variant of COVID-19 was detected among the new cases in the Victorian outbreak.

“The time between catching the virus and passing it on is tighter than ever,” he said.

Merlino said the onset of symptoms in the first and secondary case was averaging just over day.

“So unless something drastic happens, this will be becoming increasingly uncontrollable,” he said.

Victoria’s Chief Health Officer, Brett Sutton, said it was “very reassuring that all of the newly-diagnosed cases are linked. 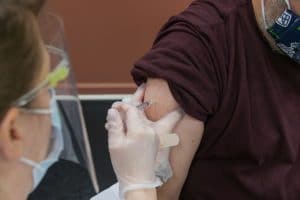 State government leaders have recently criticised the federal government over the slow vaccine rollout in Australia.

Victoria’s vaccination program will expand to include anyone aged between 40 and 49 from Friday morning.

Victorian health authorities have administrated 12,677 vaccine doses in the past 24 hours, bringing the total number of jabs to 398,009.

The Acting Premier took a moment to have a jab at the federal government, saying the lockdown may have been avoided if the Commonwealth’s vaccine rollout was better.

“If we had the Commonwealth’s vaccine program effectively rolled out, we may well not be here today,” Merlino said.

There has now been a total of 150 exposure sites connected with the Whittlesea cluster.

Two AFL matches over the weekend at Melbourne Cricket Ground and Docklands Stadium have both been listed as exposure sites.

The number of COVID-19 tests performed is being ramped up across the state as the growing exposure sites affect tens of thousands of people.

The Victorian lockdown will mark the first lockdown to extend beyond a weekend since the federal government ended the JobKeeper wage subsidy at the end of March.

This lockdown proves to be another setback for those in sectors like hospitality, retail, and aviation, which are still struggling to recover from the pandemic.