Yesterday, it was announced that two of Melbourne’s most concerning cases of COVID-19 were false positives causing Victoria’s overall case numbers to go backwards.

Despite the announcement, the news has not impacted the timeline of Victoria’s lockdown, which is set to last until next week.

“There have been a number of other cases where we have seen fleeting contact and transmission,” he said.

“The proposition put forward by public health was that we needed this further seven-day period for Greater Melbourne to absolutely run this thing to the ground. That remains the case.”

Victorian health authorities are also concerned about the emergence of the Indian variant known as the Delta strain, which has not previously been identified in the Australian community.

“It has obviously had very high transmission potential, because it spread extremely rapidly across India to become the predominant variant, almost the exclusive variant there,” Chief Health Officer Brett Sutton told reporters today.

There were four new locally acquired cases reported yesterday from a totally of 49,439 test results. There are currently 72 actives cases in Victoria.

Melbourne’s coronavirus lockdown will be extended for another seven days, Acting Premier James Merlino has confirmed.

Victoria’s seven-day “circuit breaker” lockdown was due to end at Thursday midnight but will now run for at least another week.

The five reasons for leaving home will remain in place in Greater Melbourne, which includes shopping for food and supplies, authorised work and study, care and caregiving, exercise, and getting vaccinated or tested.

The extended lockdown comes after the state recorded six new locally acquired COVID-19 cases on Tuesday, taking the state’s outbreak to 60. The number of exposure sites across Melbourne is now well over 150, with thousands of contacts currently isolating or quarantining.

The positive cases were detected from 51,033 test results received on Tuesday, while 20,585 vaccination doses were administrated at state-run vaccine hubs.

The Victorian government highlighted concerns that the Indian Kappa variant, identified in the outbreak, was more infectious than previous strains.

Merlino said the variant currently in the community was “quicker and more contagious than we have ever seen before”.

The Acting Premier said vaccinations were the best way to prevent contracting the virus but only 2 per cent of the population are fully vaccinated.

“If we let this thing run its course, it will explode. We’ve got to run this to ground because if we don’t, people will die,” Merlino told reporters earlier today.

“It’s those Victorians who will pay the price. In the end this is about saving lives,” he said.

From midnight on Thursday, Melbourne’s 5-kilometre radius around the home will be lifted to 10 kilometres.

Students in years 11 and 12 will be able to return to face-to-face learning.

A list of outdoor jobs will also be permitted during the extended lockdown, such as landscaping and painting,

Statement from the Acting Premier on restrictions pic.twitter.com/8h5l9ova4k

Merlino said the lockdown extension was necessary to prevent a deadly third wave from sweeping the state.

Victorian health authorities revealed a confirmed COVID-19 case from Melbourne travelled to several areas of NSW while potentially infectious, including Jervis Bay on the south coast and Goulburn.

Chief Health Officer Brett Sutton confirmed the case was a Victorian man who was holidaying with his wife and children and investigations were ongoing into how the family contracted the virus.

“That’s not absolutely clear at this stage because there’s no crossover with known exposure sites from the initial interview,” he told reporters.

However, genomic testing has confirmed they have the same strain of the virus as the other cases in the outbreak.

The extended lockdown means Greater Melbourne businesses will be forced to either remain closed or only offer takeaway and click-and-collect services until at least midnight Thursday June 10. 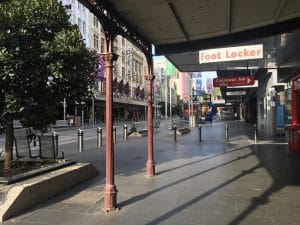 Restrictions on businesses in regional Victoria will ease from midnight tomorrow, allowing restaurants and cafes to reopen to a maximum of 50 people. Retail, beauty and personal care, entertainment venues, and community facilities will be allowed to reopen in line with density limits.

The extended lockdown is the first without the JobKeeper wage supplement, and with the JobSeeker payment back to its pre-COVID levels.

Merlino said Victorian Treasure, Tim Pallas, has reached out to his federal counterpart, Josh Frydenberg, seeking the implementation of JobKeeper-style payments to see Melburnians through to next week.

In addition to the $250 million support package for businesses announced on Sunday, the state is providing an additional $209 million to businesses affected by the lockdown.

Melbourne’s 14-day lockdown will be the longest lockdown enforced in any Australian city since the JobKeeper wage subsidy ended on March 28.

Despite the Victorian government announcing new support packages for local businesses, the extended lockdown has renewed calls for the federal government to assist businesses affected by the outbreak.