Virgin CEO Says Borders Must Open Even if ‘Some People Die’

Virgin Australia’s CEO, Jayne Hrdlicka, has called for Australia’s borders to be reopened sooner than mid-2022, even if “some people may die”.

Speaking at a Queensland University of Technology business launch on Monday, Ms Hrdlicka believed Australia risked being left behind by the rest of the world if it did not reopen borders once an appropriate portion of the population had been vaccinated.

“COVID will be part of the community, we will become sick with COVID and it won’t put us in hospital, and it won’t put people into dire straits because we’ll have a vaccine,” Ms Hrdlicka said.

“Some people may die, but it will be way smaller than with the flu.

Last week’s federal Budget put forward that Australia’s borders would reopen mid-2022 but the government has resisted outlining a time frame, saying it will open the borders when it is safe to do so.

Virgin later issues a statement in response to the comments, saying the airline believed Australia “must learn to live with COVID-19 in the community”.

We agree with state and federal leaders that eradication of COVID-19 cannot be the goal for our country,” a Virgin Australia spokesperson said.

“The question is not if but when we will be sufficiently vaccinated to protect our people and our hospital system to open our international borders.

“We must learn to live with COVID-19 in the community in a way that protects the health and safety of our people, but also opens Australia up to the rest of the world.”

The comments come amid increasing pressure from state leaders for the Federal Government to push a faster vaccine rollout and a swifter reopening of borders. 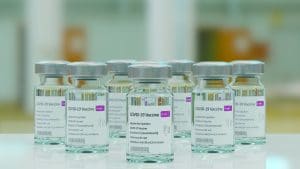 The Federal Government faces increasing pressure over the rollout of COVID-19 vaccinations.

“If we get the majority of our population vaccinated, well, then we can think about opening our international borders, and that’s what New South Wales works really hard to achieve,” Berejikilian said in a press conference Sunday.

Liberal Party MP’s Dave Sharma, Jason Falinski, and Tim Wilson told Nine newspapers over the weekend that the international border should open before the mid-2022 budget target, saying the vaccination rollout should allow an easing of restrictions.

Prime Minister Scott Morrison recommitted to the reopening target of mid-2022 on Monday, saying Australians understand the government is taking a “cautious approach” that will see a gradual easing of restrictions.

“Australians by and large share the view that Australia has done incredibly well throughout the course of the pandemic and we have been able to not only save lives but save livelihoods as well, and Australians want to see that continue,” he said.

“I think they understand the importance of a cautious approach when it comes to maintaining our border arrangements.”

Like all commercial airlines, Virgin Australia woks to put itself back together after being ravaged by the COVID-19 pandemic.

Last year, the company was placed into administration, before being bailed out by American firm Bain Capital for $3.5 billion with a focus on domestic travel.