JBS Foods, the world’s largest meat processing company, says it paid the equivalent of US$11 million ($14.2 million) to a criminal gang of hackers to end a cyber-attack that halted its operations around the world, including Australia.

JBS shut down production around the world, including Australia, for five days after falling victim to the cyber-attack.

JBS has 47 facilities across Australia and operates the largest network of production facilities and feedlots in the country.

The Brazil-based company said it paid the money, in Bitcoin, to alleviate any unforeseen issues related to the attack and ensure no data was exfiltrated.

“This was a very difficult decision to make for our company and for me personally,” said Andre Nogueira, the chief executive of JBS USA.

“However, we felt this decision had to be made to prevent any potential risk for our customers.”

The FBI has attributed the attack to REvil, a Russian gang that has made some of the largest ransomware demands on record in recent months.

A statement from JBS highlights the FBI’s assessment that the gang is “one of the most specialised and sophisticated cybercriminal groups in the world”.

Ransomware is a type of cyber-attack that infects your device, keeping your information hostage until you pay a considerable fee. A common way for hackers to penetrate security is to trick employees through emails or texts that allow disruptive software into corporate systems.

The five-day shutdown threatened Australia’s meat supply chain, with temporary staff lay-offs at some of the company’s plants, and reports from farmers that their shipments of livestock were cancelled. 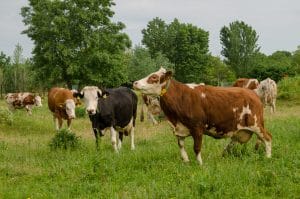 The cyberattack froze JBS operations in Australia and abroad.

However, Australian farmers have been largely able to come through the shutdown with the attack not affecting livestock prices.

Demand for meat globally from China is keeping prices up as the country recovers from a massive hit to its pork industry from African swine fever (ASF). The Philippines has been importing more beef from Australia as a result of also being affected by ASF.

In Argentina, a major competitor for Australia in global beef markets, exports have been suspended for 30 days. The demand for beef was forcing prices too high for the country’s own domestic consumption.

Earlier this week, the United States Justice Department announced it had recovered most of a multimillion-dollar ransom payment made by Colonial Pipeline, the operator of the nation’s largest fuel pipeline.

Colonial Pipeline paid a $5.5 million ransom to DarkSide, the Russian cyber-criminal group responsible for the attack, as it sought to retrieve stolen information.

The US government has expressed concern of companies paying hackers ransom, fearing it encourages future cyber-attacks.